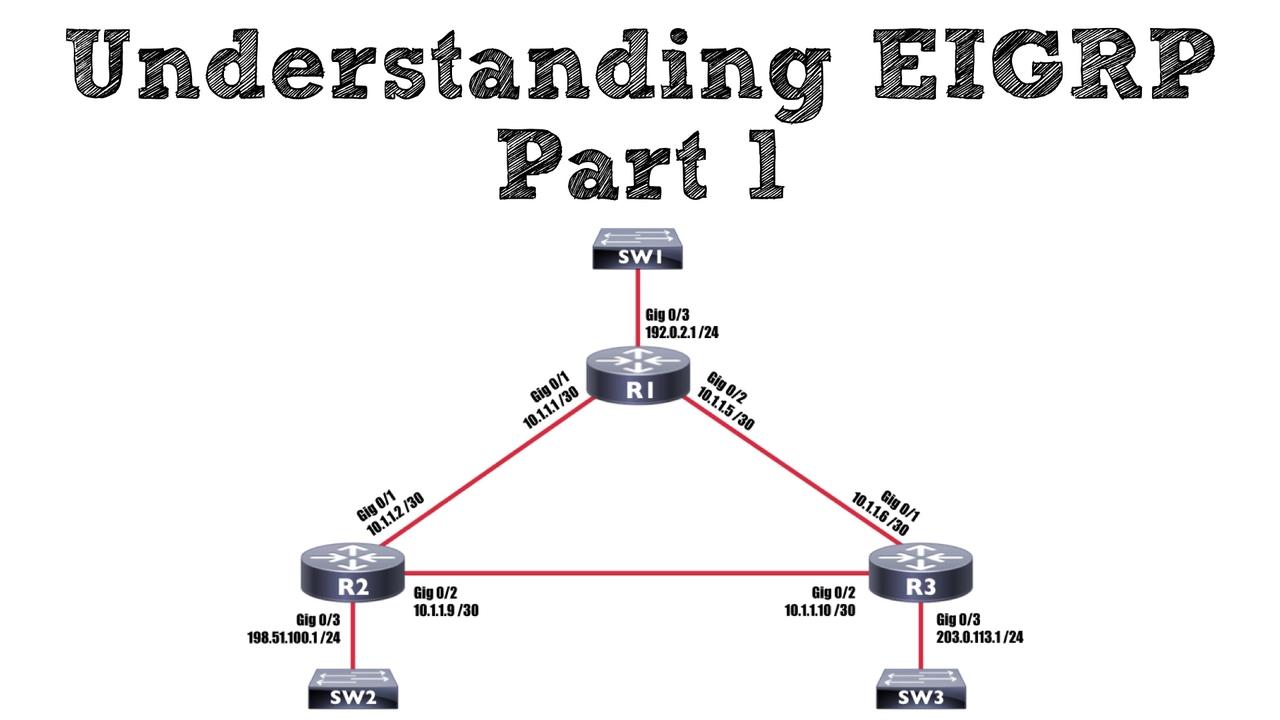 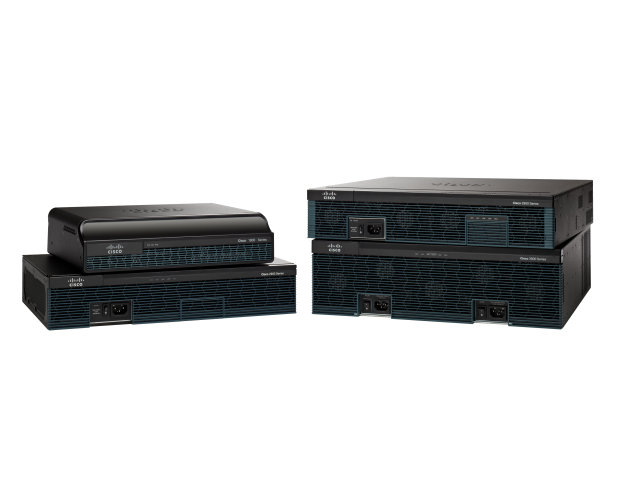 I used to work as a Network Design Specialist at Walt Disney World, in Florida. Their massive network contained over 500 Cisco routers (and thousands of Cisco Catalyst switches). What was the routing protocol keeping all of these routers in agreement about available routes? It was Enhanced Interior Gateway Routing Protocol (EIGRP). That’s the focus of this blog post, which is the first of a series of posts focusing on EIGRP.

If you already have your CCNA R/S certification (or higher), you’re probably well acquainted with EIGRP. However, unless you have an eidetic memory (like Sheldon Cooper on The Big Bang Theory TV show), you probably don’t remember every single EIGRP command and concept. Therefore, this series of blog posts is going to review and reinforce those fundamental EIGRP concepts, and even introduce a few other fun facts.

While I was in the “it’s a hybrid routing protocol” camp for many years, recently I converted to the belief that EIGRP is an “advanced distance vector” routing protocol. Here’s my reasoning: Consider the fundamental characteristic of a link state routing protocol, which is routers maintaining a topology table, indicating how routers are interconnected. These routers (speaking routing protocols such as OSPF and IS-IS) then run the Dijkstra Algorithm on that topology to determine the “shortest” path to a destination network from the perspective of a particular router. EIGRP does not maintain a view of the network’s topology, nor does it run the Dijkstra Algorithm. Rather, EIGRP’s topology table lists available networks, along with information about the “distance” to those networks. That’s my take, but I certainly won’t harbor any ill feelings for you if you’re on the “hybrid” side of the debate.

Let’s being our EIGRP review by reminding ourselves of a few basic EIGRP characteristics:

A basic EIGRP configuration is very easy to configure. In fact, it only requires two commands:

The router eigrp asn command starts the EIGRP routing process on a router for an autonomous system (AS) specified by the asn variable. This command also brings you into router configuration mode. From there, you can issue the second command, network net-id wildcard-mask. This second command uses a combination of a network address and a wildcard mask to specify a range of one or more IP addresses, and any router interface whose IP address belongs to that range of IP addresses then participates in the EIGRP routing process. However, there are some rules and behaviors to keep in mind with these commands:

To illustrate these concepts, consider the following example: 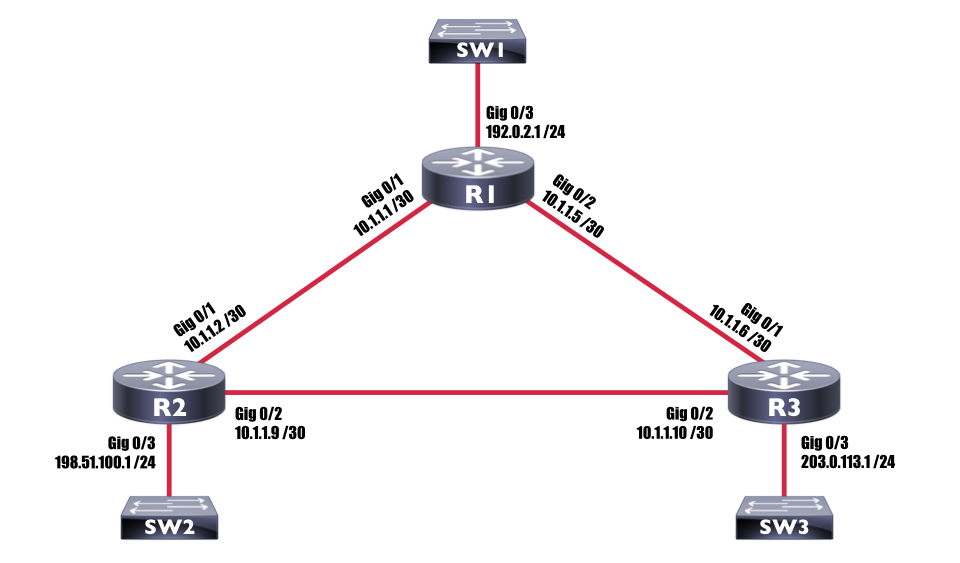 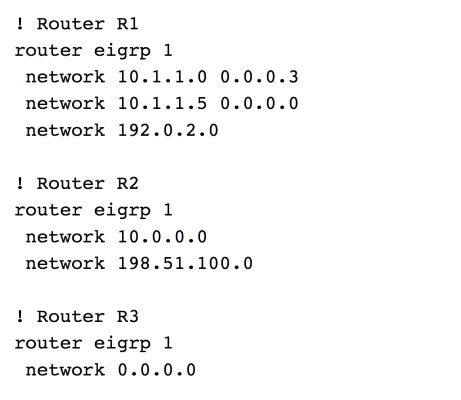 The network 10.1.1.5 0.0.0.0 command specifies a specific IP address, rather than an entire subnet (or, one might argue that it’s a subnet containing a single IP address). We know it’s only specifying a single IP address due to the wildcard mask of 0.0.0.0. Recall that in a wildcard mask we have a series of contiguous zeros followed by a series of contiguous ones (in binary). The binary zeros correspond to bit positions in the IP address that specify a network address, and the binary ones correspond to bit positions in the IP address that specify the host address. However, in an instance were we have all zeros, as in this case, we have a network of one and only one IP address (that is, the subnet mask is /32). Since the IP address matches the IP address of router R1’s Gig 0/2 interface, that interface also participates in the EIGRP routing process. 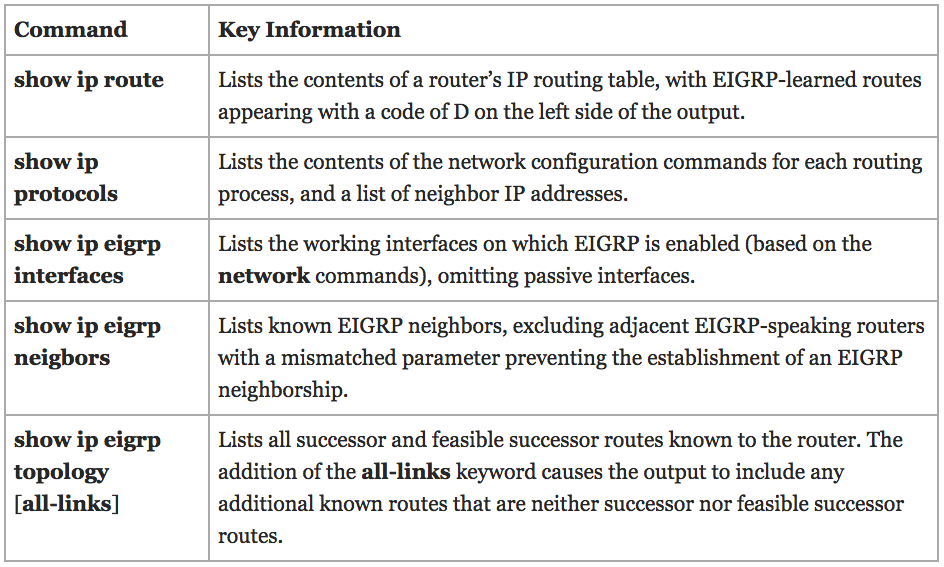 The following examples show the output from each of these commands after issuing them on router R1 shown in the previous topology. 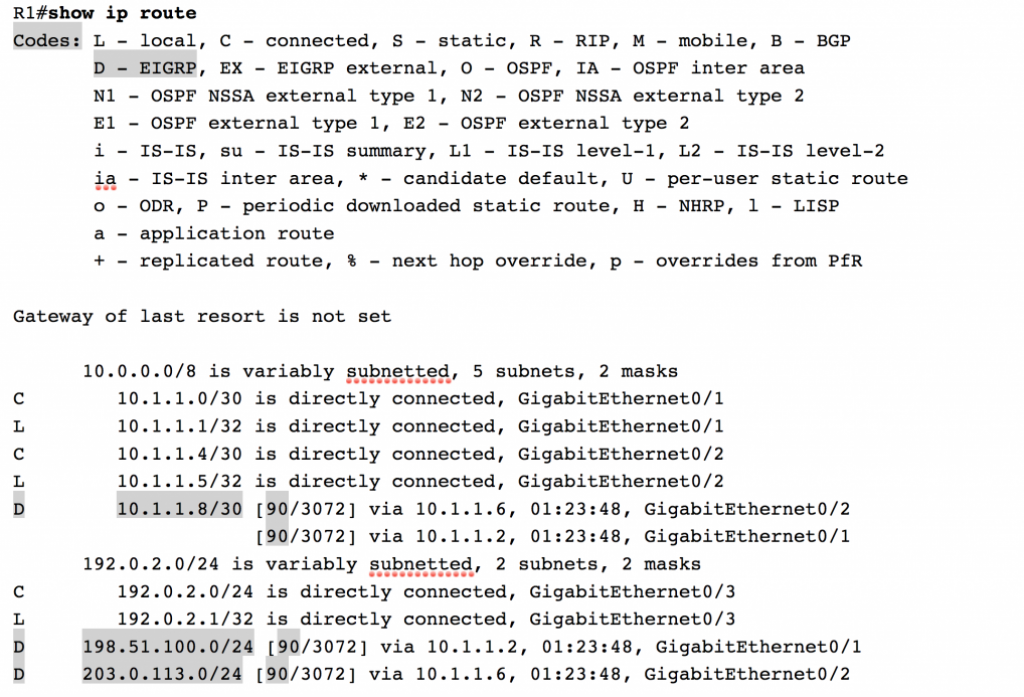 Notice how routes learned via EIGRP are shown with a D in the left column. This D code indicates a route learned via EIGRP. These routes include 10.1.1.8 /30, 198.51.100.0 /24, and 203.0.113.0 /24. Also note the highlighted 90 in each EIGRP-learned route. The 90 is EIGRP’s administrative distance (that is, it’s believability as compared to other routing sources), where lower administrative distance values are preferred over higher values. 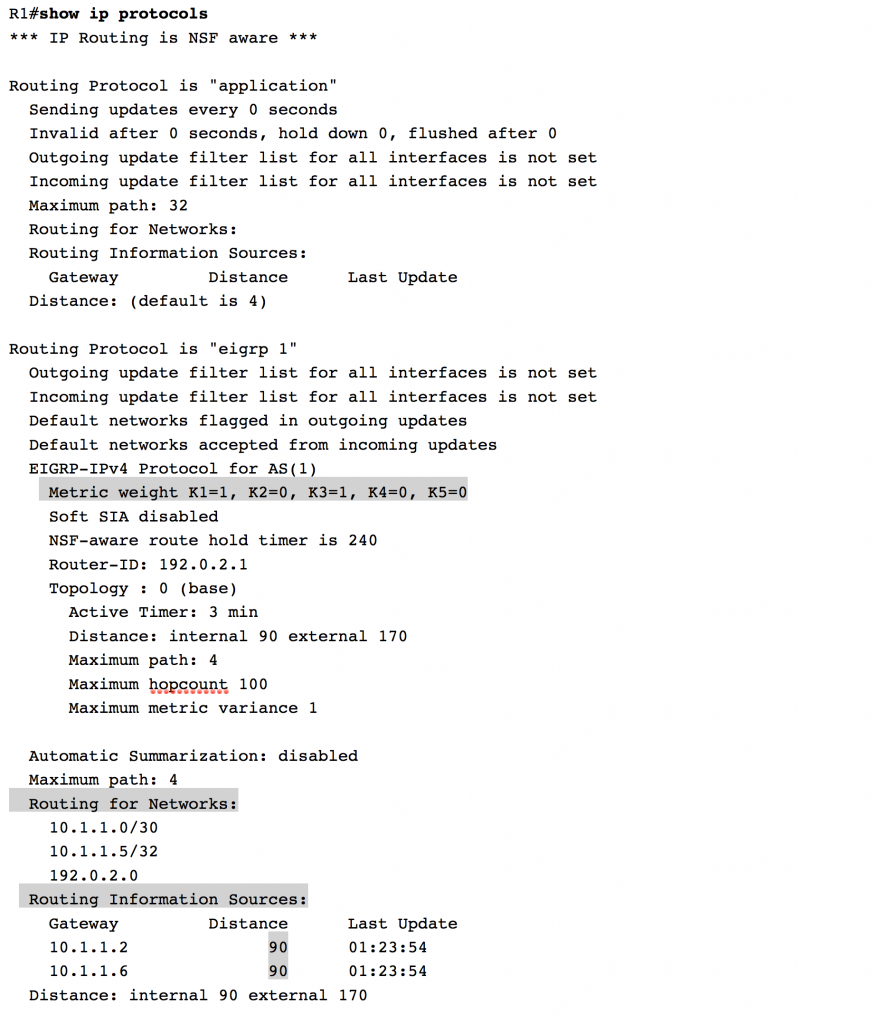 Output from the show ip protocols command on a router speaking EIGRP, as seen above, offers us several data points. For example, under the Routing for Networks: section, you see a list of networks specified by the network command under EIGRP configuration mode. Under the Routing Information Sources: section, you can determine the IP addresses of EIGRP neighbors, which are 10.1.1.2 (that is, router R2) and 10.1.1.6 (that is, router R3) in our topology. Also under that section, you can see the Administrative Distance (AD) for our neighbors. Since those neighbors are EIGRP-speaking routers, they have the default EIGRP AD of 90. Finally, notice the Metric weight K1=1, K2=0, K3=1, K4=0, K5=0 portion of the output. In an upcoming blog post, we’ll learn how EIGRP calculates its metric and how that calculation involves K-values. When we discuss those K-values, please keep in mind you can view a router’s K-values in the output of the show ip protocols command. 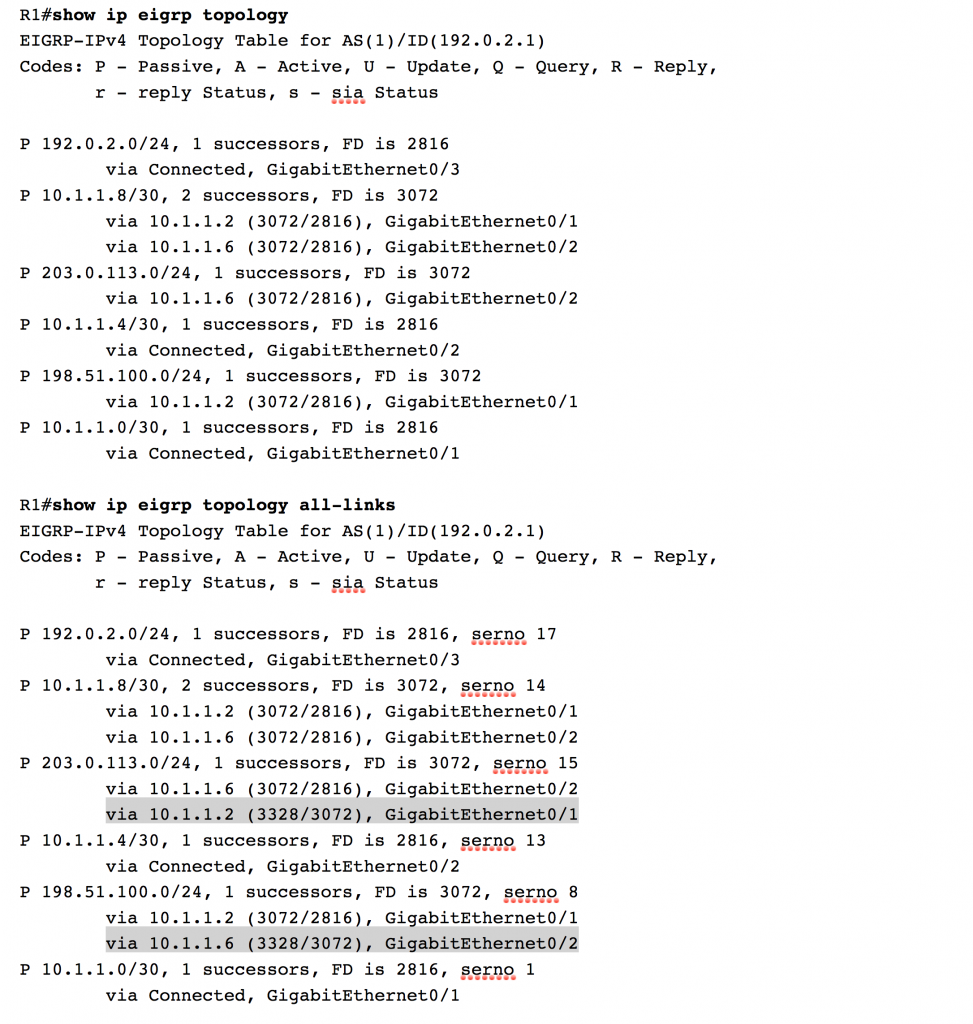 One of the most common commands used for EIGRP verification and troubleshooting is show ip eigrp topology, as demonstrated in the example above. Output from this command shows the successor routes (that is, the preferred routes) and feasible successor routes (that is, backup routes) known to the EIGRP routing process. Please keep in mind that a route’s appearance in the EIGRP topology table does not guarantee its presence in the router’s IP routing table. Specifically, the successor routes present in the EIGRP topology table are only candidates to be injected into the router’s IP routing table. For example, the router might possess more believable routing information for a network, such as a statically configured route with an administrative distance of 1. If EIGRP is indeed the most believable routing source for a specific network, then that network will be injected into the router’s IP routing table. Also, notice how the addition of the all-links argument in the above example shows even more routes, which are highlighted. The difference is, the all-links argument instructs the show ip eigrp topology command to display all EIGRP-learned routes, even if some of the routes are not considered successor routes or feasible successor routes. 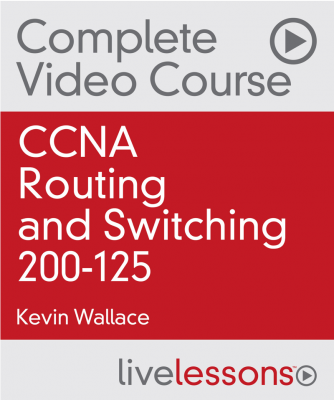 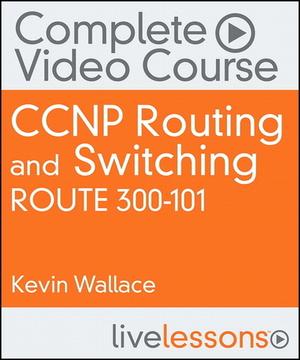 Well, that’s it for this first in a series of EIGRP blog posts. In the next one, we’ll check out some EIGRP internals. For example, we’ll dig into those K-values, and see how they influence EIGRP’s path selection. 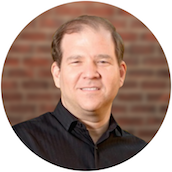